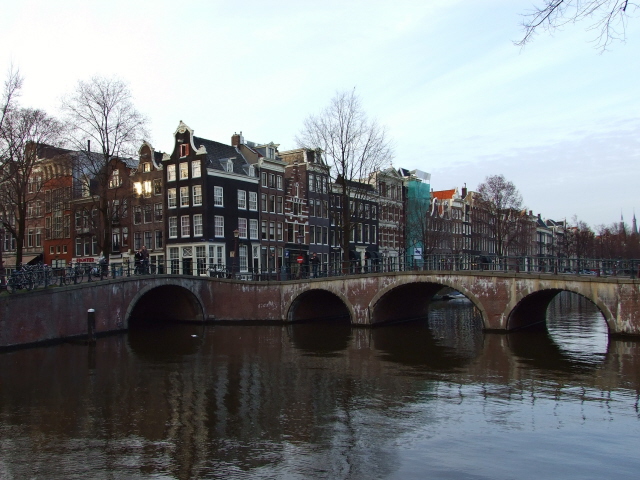 Capital of the Netherlands, and one of the most popular destinations for city breaks in Europe. Included among its attractions is one of the world's most-visited (and hence often overcrowded) dark tourist destinations: the Anne Frank House.
Less well-known internationally, but much more informative overall is the "Verzetsmuseum" – or 'Dutch Resistance Museum'. Between the two you can walk a themed trail on "resistance and persecution in Amsterdam" (a brochure with map is available at either end of the trail).

In addition to those major sites, Amsterdam also has its branch of the "Dungeons" chain as well as a smaller but similar outfit, the Torture Museum. On display in its few dimly lit small rooms are various mostly medieval instruments of torture such as thumbscrews, racks, an "Iron Maiden" and so forth, ending with a guillotine. Descriptive texts are multilingual (Dutch, English, German, French, Spanish, Italian) and are augmented by period illustrations. The museum is something you may consider taking in when in town and with extra time to kill – but it's not a must-see. (Address: Singel 449, near the flower market on the opposite bank of the canal; opening times: daily from 10 a.m. to 11 p.m. (!!); admission (regular): a hefty 7.50 EUR – a bit steep for what there is to see …)

Worth mentioning is also the Jewish Historical Museum (address: Nieuwe Amstelstraat 1), which also has a section on persecution/the Holocaust (open daily from 11 a.m. to 5 p.m., but closed on certain Jewish holidays, admission (regular): 7.50 EUR). On the premises are also no fewer than four synagogues. Attached to the museum is an extensive resource centre (open weekdays from 1 to 5 p.m.). Not far from here, en route to the Dutch Resistance Museum, is the deportation memorial site of the former Hollandsche Schouwburg (open daily from 11 a.m. to 4 p.m.).

There are also so-called "dark city walks" on offer, but these are not about "dark sites" in the sense of dark tourism assumed here (see what is dark tourism and the concept of dark tourism), rather they're about the "scary" crime-related aspects formerly associated with Amsterdam's red-light district (thus more resembling things like ghost walks or Jack-the-Ripper-walks in London – see beyond dark tourism).

Conveniently located, Amsterdam sports one of the world's premier airport hubs (Schiphol) and has excellent road and rail connections to practically anywhere in (Central) Europe. Architecturally it is generally a very pretty city, characterized by lots of canals lined with narrow old, and often charmingly "skewed", merchant houses.

There's plenty for those seeking some culture – world-class art exhibitions, museums, etc. It's well worth a visit in its own right. But what Amsterdam is perhaps especially famous/infamous for is its red-light district and "coffee shops". Both renowned for their "permissiveness". Hardly anywhere else in the world can prostitution be encountered so openly, even the mainstream tourist brochures boast about it. Similarly (in)famous is the Netherlands' open attitude towards soft drugs – marijuana in particular, which is openly and legally traded in small quantities in those so-called coffee shops. You can well imagine that this mix makes Amsterdam a prime destination for certain types of nightlife seekers. And they won't be disappointed. If the unlikely combination of dark tourism with precisely that liberal entertainment mix is your thing, Amsterdam is probably unique in offering just that (except perhaps also Hamburg, which offers a certain sex & drugs combination too, though slightly less openly, but offers more on the dark tourism front).