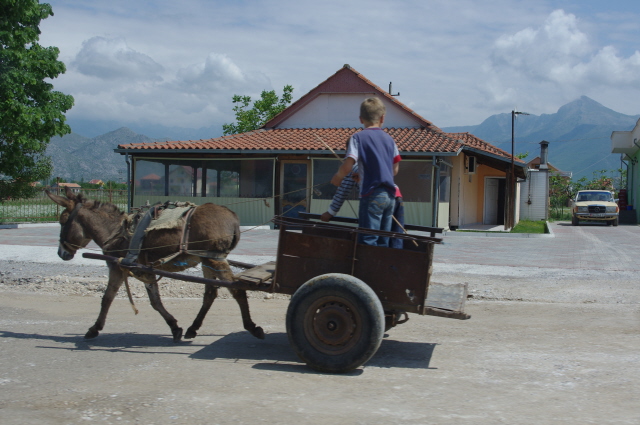 A small country in the southern Balkans bordering Greece in the south and the former Yugoslav republics of Macedonia, Montenegro and Kosovo in the east and north. Formerly, it was the most secluded pocket in Europe – a total enigma for outsiders. You just knew that the country was staunchly old school communist and even fell out with other communist countries (esp. the USSR and later China) to remain in self-chosen, paranoid isolation for decades.
The country was ruled for over four decades by its very own ultra-Stalinist autocrat: Enver Hoxha. After his death in 1985 the country officially remained communist, but slowly introduced reforms, eventually even including freedom to travel – in the wake of the break-up of the Eastern Bloc when its socialist regimes collapsed one after the other. Albania's communists hung in there a little longer, though increasingly more feebly, in a climate of unrest and chaos, until 1992. The remainder of the 1990s weren't too easy either, with lots of anarchic chaos, looting and organized crime taking over.
Since then Albania has become a parliamentary democracy, infrastructure and security have improved a lot, and the country is in the line for joining the EU. In 2009 it already became one of the most recent new members of NATO (the fact that Albania had pursued an enthusiastically pro-American, pro-Bush stance at the beginning of the 21st century may have helped speeding things up a little). At home, the political situation is still some way from perfect – as recently as in early 2011 unrests and crushed protest even led to some casualties.
Economically the country has "opened up", i.e. it's now a brutal Russia-like capitalism that reigns, which brings riches to an elite of winners while the majority remain rather poor. But at least it is now no longer a problem visiting it as a tourist, and the local population is (in theory) also free to travel.
Still, the old enigma of this formerly almost white spot on the map of Europe continues to exert a certain weird and dark appeal (see also Tony Wheeler's "Bad Lands") – and that despite the fact that hardly anything justifying this enigma is still there to be seen. All the Enver Hoxha monuments are gone and most other signs of the former rule have practically disappeared too. None of the infamous former labour camps for political prisoners have been commodified in any way either (as far as I could find out at least).
In other words: the country could have had an enormous dark tourism potential, but it hardly makes anything of it. On the contrary – more vestiges of the old days keep disappearing, e.g. from the National History Museum).
One of the country's defining features of those bygone times, however, can still be seen littering the landscape: hundreds and hundreds of little 'pillbox' bunkers bulging like big grey mushrooms from the pastoral lands … Some have found new uses, e.g. as bars (sometimes in colour too!) but most are simply left to rot.
The only megalomaniacal architectural feature attesting to any (former) cult of personality around Enver Hoxha that is still in evidence (though in bad shape) is the "Hoxha pyramid" in the capital Tirana – a building (designed by his daughter and son-in-law!) that was intended to serve as a mausoleum and museum about his glorious achievements. Since the fall of communism it has instead been used as a Cultural Centre and at one point even housed a night club. Now, however, it is largely derelict and in a very bad state.
At least the National Art Gallery still shows some of the images from the communist "glory days" – socialist realist paintings celebrating workers, farmers and soldiers. It's not much, but better than nothing at all.
- Albanian bunkers galore

- Tirana (Enver Hoxha pyramid, National History Museum, National Gallery)
Many also associate Albania with dark elements of very different sorts, namely the age-old blood-feud tradition that is still alive in (rural) Albania on the one hand, and the lawlessness and Mafia structures of more recent post-communist times on the other. Needless to say, though, neither are in any way at all something for tourism.
As Albania is trying to shake off all memories of its communist era, as well as its anarchic post-communist chaos, it is now rather the country's (rich) ancient history that is being marketed for tourism. And there are certainly various significant sights, including Ottoman-era heritage sites, old Roman/Greek ruins and the like. Albania also has lots to offer to those after the folksy cultural and remote "untouched" mountain scenery. The coastline too is naturally an attraction for many.
These days it is fairly easy to travel to Albania. Visa requirements have been lifted for most Western nationals (and a few Eastern ones). Entry and exit fees are finally a thing of the past as well (at least for now it seems). Only entering by car still makes you eligible for a road tax (10 EUR on entry, 2 on exit).
You can fly into Tirana's international airport, or come by ferry from Italy or Corfu – there are a few connections to port cities such as Durrës, Vlorë and Sarandë.
Going overland means by road, as there are no train connections of Albania's decrepit rail network leading out of the country. Buses go to a few hubs in neighbouring countries, but connections are not always straightforward (as I found out when planning my journey from Tirana to Podgorica). Sometimes hiring a taxi for overland transfers is the simplest solution – and, given the small size of the country, not even all that expensive. Driving a car yourself has in theory become more of an option, as roads have been improved/built – but venturing into Albanian traffic, especially in conurbations, and in particular in Tirana, is still a major challenge. During the communist era, only a few hundred cars existed in the entire country as only some selected top-brass party functionaries were allowed to have them. Since the fall of communism, cars, mostly used, and especially the German make with the iconic star, have flooded into the country and clogged up the roads, while drivers taking to the streets were completely unregulated. Not even a driving licence was required. The resultant anarchy in driving styles persists to this day. It's near-Darwinian survival – no, not of the fittest – but of the most ruthless, that is the only rule in traffic here. Accordingly, and totally unsurprisingly, accident statistics are appalling. If you want to risk taking part, at least try to drive as defensively as possible. In the country (and quite often in towns too) you also have to share the road with horse or donkey carts – requiring extra attention.
Food & drink in Albania bear the stamp of centuries of Turkish influence in the Balkans – and in these modern times that of the power of international fast food chains. But there are a few less ubiquitous national specialities too – if you can find them. Much more common than Albanian traditions, are, apart from fast food, mainly Italian restaurants (also some Greek ones). Outside those restaurants that are geared up for foreigners, the language barrier makes dealing with menus a challenge, though.
By the way: Albanian is an Indo-European language, but of a distinct branch, so it looks and sounds quite exotic (even the country's name is totally different in Albanian: Shqipëria). Greek and Romance influences are noticeable, and sometimes what you hear bears a confusing quasi-resemblance to Italian or Romanian – but never really quite (which is quite intriguing). But mostly everything will by cryptic to the outsider. On the plus side, the writing system is Latin, so at least deciphering street names etc. isn't as much of a problem as it is for those unfamiliar with the Cyrillic alphabet, which is used in parts of the rest of the Balkans.
Back to the culinary thread: Albania used to have as much of an ancient wine culture as other Balkan countries but periods of Stalinist rule followed by post-communist economic chaos and hardship have left very little of it intact. However, I was surprised to find some astonishingly good red served in a Tirana restaurant! The national tipples, however, are coffee, beer and that typical south-Balkan spirit Rakia.
Smoking is an annoyance in Albania, which even tops all other Balkan countries in this respect (and that is saying a lot!). Not only do all Albanians appear to smoke everywhere all the time, the type of cigarettes which they seem to be almost surgically attached to are of a particularly stinking sort. That includes the Western "brands" – which are probably all counterfeit contraband anyway. So if you thought normal cigarette smoke is stinky, wait until you're surrounded by the Albanian plumes of smoke, which seems to be more from smoldering donkey dung than tobacco and which permeates everything. What's worse still is that Albanians don't understand the concept of no-smoking sections. They do exist in many restaurants and are clearly marked, but that means next to nothing: the best you can hope for is that not everybody smokes twenty an hour but maybe only 90% of the customers smoke only 19 an hour. Well, what can you expect in a country that is better known for lawlessness than good manners … all the more remarkable that it's such a different story in neighbouring Macedonia …