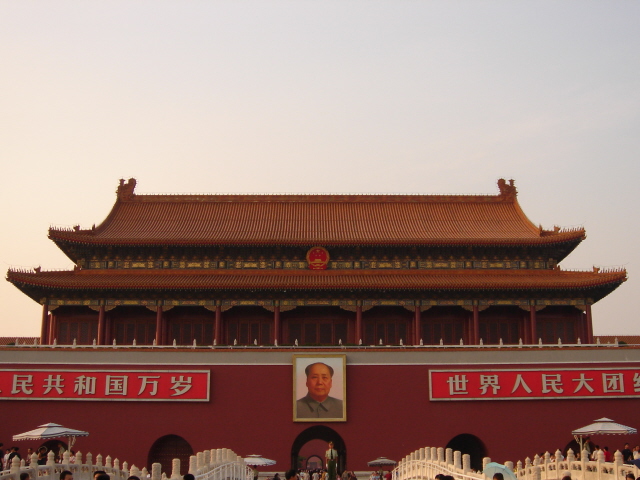 A truly huge country, but not offering a huge amount for the dark tourist – or not much that can be visited (safely). China is hardly a haven of free speech and openly coming to terms with the darker sides of history (let alone the present), of which there are far from few – just think of the so-called "cultural revolution" (which also served as the model for the Khmer Rouge's Cambodian genocide).

So, with the exception of the Nanjing massacre memorial and the Unit 731 Museum (both of which point the finger at Japan as the culprit), there's very little that's really developed for dark tourism as such. However, there are two further places which are marketed for other reasons but which do have a certain overlap with (kinds of) dark tourism: one about (former) cult-of-personality tourism, first and foremost: Mao's mausoleum on Tiananmen Square. There are also other Mao cult-of-personality sites in the south, e.g. at Mao's birth place in Hunan.
The other is the Three Gorges Dam – marketed as a great technological achievement, but it can also be considered a dark site, namely for both the grievances it has already caused as well as for the potentiality for disaster in the future that it holds.

One already current environmental disaster is the burning coal fires esp. in the north (in particular around Wuda – see places not to be visited), but those are pretty much out of bounds for tourists (as are practically all of the other currently dark sites in this huge empire; so forget about visiting concentration camps for Uighurs in the north-west, for instance).
Update: there are apparently also some places related to earthquakes, such as the Beichuan Earthquake Museum in Sichuan. But since returning to China is very low on my personal travel wishlist I haven't looked any deeper into these things. So on this website, there are only the following four stand-alone chapters for China:
- Nanjing Massacre Memorial, Nanjing