update March 2013: Hugo the Humongous is no more! After almost two years of battling cancer, Venezuela's controversial president Hugo Chavez died. The country had seven days of official state mourning … but what will happen now after Chavez is difficult to predict … whether Chavez's "21st century Bolivarian socialism" can survive without its leading figure will be a decisive question.
At one point they even said they'd embalm the body of Hugo Chavez and put him on permanent display in a "Museum of the Revolution" – specifically in the mausoleum style of the "Big 4" like Lenin's or Mao's … that would indeed have lifted Venezuela up a few levels in terms of dark tourism. But it was not to be ... they simply left it too long to start the embalming process and instead displayed him too long, even in the open ... and remember: this is a tropical country! Once decomposition has properly set in, a Lenin-style embalming is no longer possible. In a way this failure is emblematic of the country; they even squandered this chance through sheer incompetence ...
Update March 2014: A year on, the country is even more bitterly divided and street protests and heavy handed security forces responses have made many urban areas of the country very unstable and unsafe. Tourists should certainly stay clear of any such hot spots!
Update 2015: nothing much has improved. Violence is still rampant in the cities, break-ins and murders are commonplace. Stability seems far away. It's still fine to go and see the splendours of the countryside as a tourist, but better don't wander around Caracas ...
Update 2017: in addition to the political chaos with often violent demonstrations (in which people were killed), the country has also descended into hyper-inflation. This does make independent travel in even the relatively peaceful parts of the country additionally difficult. For the time being it really cannot be recommended. It is to be hoped that this beautiful country will find its feet again somehow, but it doesn't look too good at the moment ... 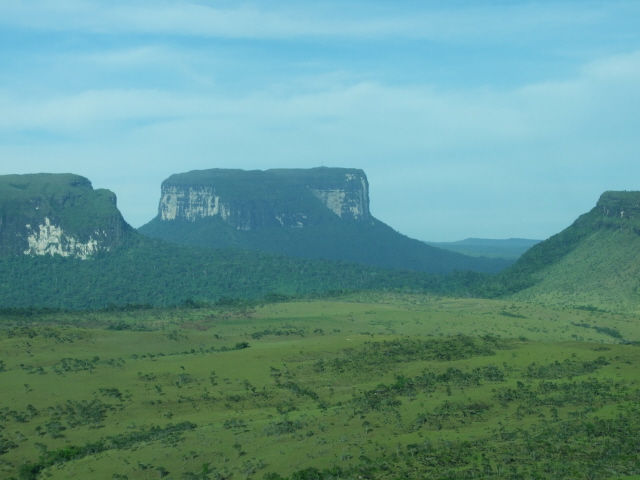 OK, Venezuela is not primarily a dark destination, but there's a slight indication of it in the form of politics. The country's socialist president Hugo Chavez (from 1998 to 2013) was as controversial as he was influential. To the outside world he's primarily known as one of the most outspoken critics of US economic and foreign policy, which earned him praise from some sides, especially within Latin America (e.g. Bolivia), while the USA and close US allies considered Chavez a "threat".
At home, opinions were, and still are, sharply divided too. He may have had a lot of support from the poorer sections of the population, because of his promises of a more just wealth distribution, housing projects, etc. – Chavez called it a "revolution"). On the other hand he is despised by a large part of the better-off and esp. the elite upper class (to whom the same politics may indeed be a threat).

For the dark tourist, the only visible signs of all this are the many propaganda posters in the country including some evidence of a mild (comparatively speaking) form of a cult-of-personality. Back when I was there in early 2008, I saw plenty of victoriously waving Chavezes beaming down from large posters, usually accompanied by the slogan "socialismo o muerte" = 'socialism or death' – very reminiscent of Cuba. Occasional directly anti-American posters were also to be spotted. The most impressive one I saw was one depicting a skeleton Uncle Sam holding a scythe being kicked up the butt by a grinning corn cob saying "el maiz no es combustible" = roughly: 'maize is no fuel', which refers to the increased purchase by the US of corn for so-called "biofuels", which threatens to deprive Latin Americans of a crucial traditional food source.

In the violence-ridden capital, Caracas, there's also a mausoleum that may be of interest to the dark tourist, namely that of the nation's (and continent's) liberator Simon Bolivar. In 2010 Chavez even had the body exhumed and investigated, in order to confirm the conspiracy theory that Bolivar had not actually died from natural causes but was assassinated. The scientists in the end could neither confirm nor deny this. Yet Chaves commissioned a grand new mausoleum for his hero. And this was inaugurated in 2013, ironically after Chavez's own demise.

Those dark-ish aspects aside, Venezuela's tourism has traditionally focused mainly on the country's outstanding nature and scenery. For those who can't imagine a holiday without tropical beaches, Venezuela has some of the best bits of the Caribbean along its northern coast and islands.

But the truly spectacular is to be found inland. The wild expanse of the Orinoco Delta can almost rival the Amazon for wetland wildlife, isolation (no roads – all transport is by boat) and indigenous tribes. And the table mountains (Tepuis) of the Gran Sabana are one of nature's greatest spectacles on the planet.

The Tepuis rise from the rainforest and savannah like gigantic blocks, with vertical cliff-faces towering well over 3000 feet (1 km) above ground. The most famous ones are Auyan Tepui and Mt Roraima. The former is the largest by area and is the most visited one because of the highest waterfall on earth, Angel Falls, that drains from the table mountain in a spectacular nearly 3000 feet (900m) drop, 19 times higher than Niagara Falls (!). Mt Roirama, located on the border with Brazil and Guyana, is the highest of the Tepuis, ca. 9000 feet (2800m), and probably the most scenic – especially thanks to its ship-bow-like pointed northern end.

The Tepuis are also considered to have been the inspiration for Arthur Conan Doyle's "The Lost World", which in turn inspired lots of further adventure stories involving dragons, dinosaurs and other mystical monsters. The environment on top of the Tepuis is indeed unique and brimming with endemic species – though real-life dragons have yet to be sighted …

The world of the Tepuis may no longer be totally "lost", but it sure is remote. Getting to Roraima is an expedition – though the mountain itself can be climbed somewhat more easily than other Tepuis, which are often totally inaccessible.

Only Auyan Tepui sustains some sizeable tourism infrastructure – mainly because of Angel Falls, of course. Most people just go on a scenic fly-by excursion to see the Falls from the air. But from the few camps and lodges in Canaima, one or two-day ground trips to the base of the Falls are offered, which is naturally much more adventurous an undertaking.

But even getting to Canaima can have the character of a little adventure: as there are no roads leading there, small planes provide transport, involving shaky flights over hundreds of miles of uninhabited rainforest by 40-year-old little four-seater Cessnas steered (by sight only) by some hardened bush pilots. It's cool beyond description. And the sight of the Tepuis ranks in the top three of the most awe-inspiring things I've ever seen (see top-10 travel moments).

In terms of food & drink, on the other hand, Venezuela was probably the worst place I've ever travelled in. No spices, no sauces, no idea – and next to no catering for non-carnivores, so you're stuck with bland rice and beans most of the time (unless you go to the coast, I suppose, where you should be able to get good seafood – but I only travelled inland).