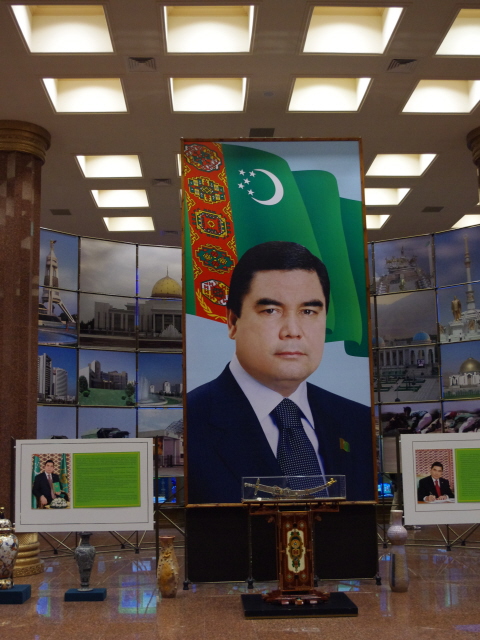 A Central Asian country on the southern edge of the area, wedged in between the Caspian Sea, Iran, Kazakhstan, Uzbekistan and Afghanistan. It was a constituent republic of the Soviet Union – and today keeps up the tradition of a repressive regime and a totally OTT cult-of-personality like few other countries on Earth.
--- jump to photos ---
Overall, it is one of the most crazy and exotic places I have ever been to, and that applies in several ways, including (but not only) in terms of dark tourism. These are the individual places covered in detail on this website:
- Ashgabat (Turkmenbashy Gifts Museum)

- Mausoleum of the Turkmenbashy

- Garabogazköl salt lagoon and mineral mine area
Turkmenistan is probably the weirdest and most bizarre of all the Stans (i.e. those former Soviet Republics in Central Asia whose names end in "-stan"). Until a few years ago it was ruled by an autocratic leader who created a cult of personality second only to that of the Kims in North Korea. Saparmurat Niyazov served as First Secretary of the Turkmen Communist Party from 1985, leading the country into post-Soviet independence and ruling as president until his death in December 2006. The president even adopted the epithet "Turkmenbashy" – 'father of all Turkmen', under which he is still known to much of the world, although within the country he is typically referred to as "the first president of Turkmenistan" (these days at least).
Riches from oil and gas exploitation certainly helped sustain his regime as well as good relations with foreign investors. This may also explain why this extreme state was left comparatively unchallenged by world powers – even though it should at least have earned a place in the axis of weirdos, if not baddies!
The eccentric Turkmenbashy cult-of-personality craziness included renaming places after himself and also changing the names of the days of the week and months of the year to his personal whim. He made his book of random wisdom, the "Ruhnama", bible-like compulsory reading for all citizens. He had golden monuments of himself (and his book!) erected. And when he was forced to give up smoking for health reasons he immediately ordered his entire government staff to follow suit and outlawed smoking in public for the entire country (so not everything the great Mr T did was all bad …). At the same time political repression was, and still largely is, maximal – no opposition, no freedom of speech, no free media, no nothing.
When the Great Turkmenbashy's "walk of health" suddenly ended in death in December 2006, the country at first hung in some uncertain state of limbo. Meanwhile, the second president, who answers to the resounding name of Gurbanguly Berdymukhamedov (yes, that's ten syllables!), has progressively toned down the Turkmenbashy-related cult of personality ... and moved it into a Berdemukhamedov cult-of-personality direction.
So the Turkmenbashy's image is far less ubiquitous than it used to be, while images of his successor have replaced them in many places. Some formerly most remarkable monuments to the Turkmenbashy cult have fallen victim to this development too, especially in Ashgabat, and more are likely to follow. But there's still enough weirdness of this kind to be encountered in the country. So Turkmensitan certainly remains a prime destination for tourists with a taste for such weird things.
-----------------------
UPDATE March 2022: a surprise change at the top has come this month: Gurbanguly Berdemukhamedov suddenly announced to step down and hand the helm to someone younger. A snap "election" was held that the new man won by 75% (down from the Turkmenbashy's and his successor's usual 97-99%).
And the new president is called: Berdemukhamedov! But now it's Gurbanguly's 40-year-old son Serder. It's a kind of dynastic, or 'hereditery succession' (again, similar to North Korea's). It can be expected, though, that his Dad will remain influential behind the scenes, and no real political reforms are expected by anybody any time soon. But it will be interesting to see if there will be a new shift in the cult-of-personality excesses that Turkmenistan so excels at.
-----------------------
Beyond that, there are also geologically interesting sites, such as the (almost) environmental disaster site of the flaming gas fire crater of Darvaza in the middle of the desert (which, however, appears to be doomed, unfortunately), a unique and popular bat cave with a sulphurous underground lake you can go swimming in at Kov Ata, the world's largest salt lagoon at Garabogazköl, as well as bizarre-looking ancient ruins in large areas of desert, the world's biggest bazaar, and other unusual attractions.

There are also lots of ancient history relics that feature on the country's tourism radar – after all, the Silk Route also passed through what is today Turkmen territory … and one the most remarkable relics of this time, Merv (or "Mary", as it is currently called), is to be found in Turkmenistan.
Interestingly, Turkmenistan also boasts several entries in the Guinness Book of Records and they seem to be fiercely proud of this. This includes the world's biggest carpet and highest free-standing flag pole (see Ashgabat), but also the world's longest irrigation canal …
The people living by the desiccated Aral Sea in Uzbekistan will probably find this last record-breaker less reason to shout proudly about. Why? Because this canal diverts the waters of the Amu Darya river which used to feed the Aral Sea. Instead these waters are used mostly for irrigation of cotton fields - thta is: what hasn't simply evaporated before it had a chance to get there. You can see the canal on the northern edges of Ashgabat and spare a thought for those who because of it lost their livelihoods by the Aral Sea …
Travel information:
As you might expect of such an exotic place, Turkmenistan is not the easiest country to get to, especially not as an independent traveller, but package tours of various lengths are offered by a few operators (including Koryo Tours – here's another link to the DPRK!). They will all include Ashgabat, but vary as far as the other sites mentioned here are concerned. So shop around and do some research way in advance if you are thinking of visiting Turkmenistan. Garabogazköl is by far the least likely to be part of such programmes, whereas Darvaza seems to feature surprisingly frequently – at least for the time being.
The red tape to be dealt with isn't all that bad, at least not when you travel with a recognized agency that can provide visa support. You still need one of those "letters of invitation" to be able to apply for a visa though. But you can obtain the actual visa on arrival at Ashgabat airport – though it's expensive. Prices seem to be subject to a certain degree of arbitrariness. But the base price is something like 100 USD (+/– 20, depending on nationality), more if you try to pay in Euros, for which I've seen at least one traveller being heavily penalized by way of extra "handling fees".
Even if you have already obtained your visa from an embassy in your country of residence, which is somewhat cheaper. (I was charged 55 EUR in Vienna, but at least it was a swift process), you are still asked to pay an extra "registration fee" on arrival at immigration (12 USD, I think I had to pay). The real registration, done by hotels usually, doesn't cost extra but you need two additional passport photos for this.
Within Ashgabat you are free to roam (photography may be restricted, though), but for other parts of the country you should either go on an organized tour or at least check whether you need special permits – which is the case for some border areas in particular.
The currency of Turkmenistan is the Manat (1 Manat = 100 Tenge), which is roughly the equivalent of ca. 0.25 EUR (1 EUR = 4 TMT) as of May 2015. The former days of a black market rate and an official rate are over. It's all the same these days – in fact, trying to change money on the black market can now even be less favourable. At least that's what some fellow travellers in my group found out when they almost got really screwed by two black marketeers – and that right next to an official exchange booth, at the airport, where I had done my transaction for a perfectly good rate only half an hour or so before.
For more practicalities see under Ashgabat.
One final note on language: Turkmen is (unsurprisingly) a Turkic language that has a lot in common with Turkish, Uzbek and Azeri. One characteristic of the language is the phenomenon of "vowel harmony", which means words can only contain back vowels or front vowels, but the two classes never get mixed. The "y"-sound is thus normally not an /i/ but a neutral back vowel like the <a> in "about". So it's not "Turkmenbash-ee", but closer to "Turkmenbash-uh".
Russian, the lingua franca of the ex-Soviet Union, continues to serve that function to this day, so a halfway passable grasp of Russian is very valuable in dealing with people. Outside international hotels and a few tourist-oriented services, English is not very widely spoken.