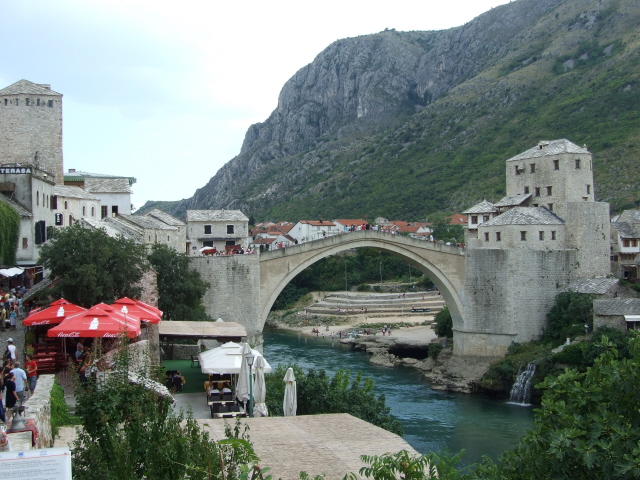 Bosnia & Herzegovina (BiH for short) is a nearly landlocked Western Balkans state that used to be part of former Yugoslavia. In the process of the break-up of the latter, Bosnia and Herzegovina followed Slovenia and Croatia in declaring itself independent – only to be plunged into a brutal war.
Three places in particular are of note here:

- Mostar
- Srebrenica (Potocari)
Of all the Balkan wars in former Yugoslavia in the 1990s the conflict in Bosnia-Herzegovina was the bloodiest, longest, and most complex. So complex indeed, that it is beyond the scope of this website to give more than the briefest and most simplified summary:

The region had been multi-ethnic and multi-faith for centuries, a constellation which typically provides for enough potential for conflict in itself. During the Tito era of communist Yugoslavia, however, these ethnic/nationalist tensions seemed to have gone away, but in fact they were still lurking beneath the surface…

As soon as Tito was dead, these tensions resurfaced, esp. as communism was collapsing in the whole of Eastern Europe. In the first free elections in Bosnia-Herzegovina the communist party was washed away and various nationalist parties took over. And therein lay the sparks for conflict, as there are various competing nationalities in the country, the main groups being Muslim Bosniaks (a legacy of centuries of Ottoman rule), Catholic Croats and Orthodox Serbs. In addition to in-fighting came the relevant allegiances with neighbouring Croatia and Serbia/Montenegro (then still the remaining 'Yugoslavia').

As war had broken out between the Serbs and newly independent Croatia, an arms embargo was imposed – which left the Bosnians at a serious disadvantage. There was basically no Bosnian army, just police forces and some militias, whereas the Yugoslav army was one of the most heavily armed military forces in Europe. And this army came in to support the Bosnian Serbs against the Muslim Bosniaks. The Serb-dominated parts of the country formed what they called the Republika Srpska, and in conjunction with Serbian president of Yugoslavia Slobodan Milsosevic's dreams of a "Greater Serbia", this led to war and "ethnic cleansing" so nasty that the rest of Europe was practically paralysed in shock.

The capital of Bosnia and Herzegovina, Sarajevo, was laid under siege for nearly four years, Muslim Bosniak enclaves within Srpska, in particular Srebrenica, became sites of massacres of genocidal proportions, and in the south-west ethnic Croats clashed with Muslim Bosniaks esp. in the town of Mostar. UN "peacekeeping" forces that had been sent into the country proved incapable of stopping the carnage. In fact, the role of the UN and indeed the entire outside world in the Bosnian war was one of massive failure … until NATO forces finally did intervene in 1995, forcing the Serbs to the negotiating table.

In the resulting Dayton Accords the road to peace was laid down – together with a most complicated power-sharing constellation. Basically, the state as such was to retain the original borders of the Bosnia and Herzegovina of former Yugoslavia, but internally it consisted of distinct "entities", namely the mainly Serbian Republika Srpska and the 'Federation of Bosnia and Herzegovina' shared by Muslim Bosniaks and Croats. All three ethnic groups have their own 'president', and the presidency of the presidency rotates amongst them. At the lower levels of government and administration the complexity continues … and if you think this is all crazily complicated, ask any Bosnian and they'll happily agree. But at least there's peace, for now. The underlying ethnic tensions are far from over, but they seem to be under control, more or less. UN/EU forces remain in the country to ensure it stays that way. But the potential for further conflict cannot be denied.

For the time being, however, the country is certainly peaceful enough to be perfectly visitable for tourists. For general tourism, there's lots of pretty scenery and important architectural treasures (some, like the Old Bridge in Mostar, rebuilt after destruction in the war). It's still a relatively cheap place for independent travel – and the people are welcoming to foreign travellers.

For the dark tourist, it is of course first and foremost the remnants of the recent war and its atrocities that make Bosnia-Herzegovina rank high on the list of dark destinations.

All over the country, ruined and abandoned or only partly restored houses are constant reminders of the recent war, and even though displaced people are slowly coming back, these (semi-)ruins will continue to be a particular characteristic of rural Bosnia. They will all have their own dark story behind them, but these are not so developed for dark tourism, so Sarajevo is really the most significant base for dark tourism in the country – the other two destinations listed above can be reached from Sarajevo as day trips.