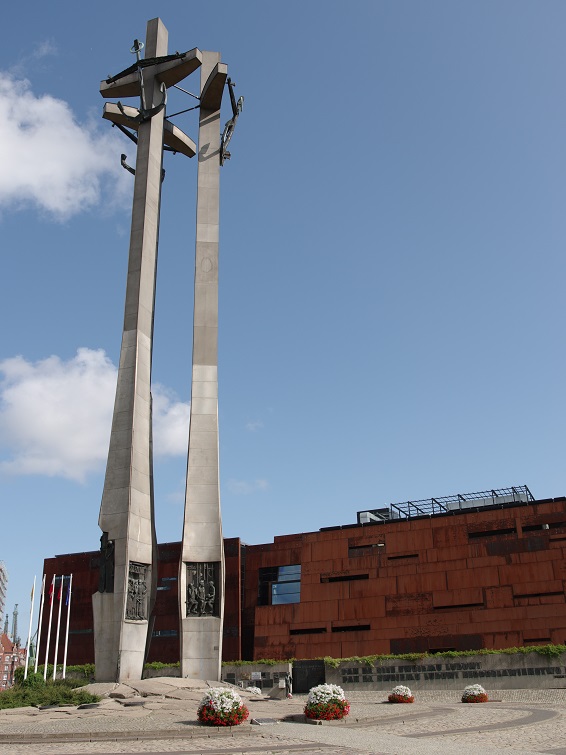 The area outside the main gates to the Gdańsk shipyards, famous as the backdrop for crucial parts of the media coverage of the trade union movement Solidarność's struggle for freedom in the 1980s.
The square is dominated by a huge monument erected in 1980 in honour of the victims of the violently crushed strikes and demonstrations in 1970. Those were a precursor to the Solidarność movement in the 1980s that eventually led to the abolition of communism in Poland, the break-up of the entire Eastern Bloc and the end of the Cold War.

More background info: The old shipyards of Gdańsk were at the forefront of Poland's organized resistance movement of the 1980s; together with the steelworks in Kraków's Nowa Huta – when both plants, incidentally, were named after Lenin. And they had been the site of resistance and strikes before; especially in 1956 and again in 1970, when the strikes and protests which was brutally crushed by the militia.
But from 1980 onward the independent self-governing trade union that was given the name Solidarność became a key player here
Through the media coverage of the strikes and demonstrations, the Solidarność logo became known worldwide as a symbol of resistance against communism. And the backdrop to much of the protests' footage was the shipyard's No. 2 Gate at what is today called Plac Solidarności – renamed in honour of those who eventually brought about those massive changes not only in Poland but in the whole of the Eastern Bloc.
For more historical background and summaries of these developments see under European Solidarity Centre, Sala BHP and Old Gdańsk Shipyards.
What there is to see: The main original historical structure of note here is the former Gate No. 2 of the Gdańsk Shipyards, or ‘Stocznia Gdańska’ in Polish, as it still says in large letters above the gate. When the communist authorities named the shipyards after Lenin in 1967 (see Sala BHP) an additional sign saying “im LENINA” was added – but this was taken down as part of the demise of communism in Poland. When in 2012 it was reattached for a film about Solidarność leader Lech Wałęsa for scenes shot at this original site there were even protests against its temporary reappearance and in the process it was sprayed with red paint!
Also above the gate is a recreation of the plywood panels on which the strike committee had hand-written the original “21 demands” over which they negotiated with the authorities in August 1980 in the nearby Sala BHP. And when these demands were met by the government this constituted the official founding of Solidarność. The original of these plywood panels are on display inside the European Solidarity Centre (ECS).
You can still see various incarnations of the familiar Solidarność logo, as well as images of Pope John Paul II, attached to the gates. When I first came here there was even a souvenir ship inside the gatehouse, but this has disappeared, probably because the shops of the neighbouring ECS and Sala BHP will have taken over this role. That striking rusty-red edifice dominates the backdrop, but on the square itself the main other element is
the huge towering monument to the victims of the militia's crushing of the 1970 strikes (see above). The monument consists mainly of three tall columns ending in crosses at the top that together form a triangle. From the crosses, anchors are suspended – probably to reflect the shipbuilding-associations of the place.
At the bottom, the columns are adorned with plaques – as is a whole memorial wall opposite. Here an eclectic collection of plaques and sculptures honour various personalities and organizations involved in this chapter of Poland's history. Fresh flowers suggest that the site is still in use as an 'active' memorial and well looked-after.
There used to be another gate to the shipyards between where the ECS now is and the Hotel Gryf; but that gate has disappeared, probably to make way for the new car park and road into the ex-shipyards beyond.
A new touristy element can be found just behind the long memorial wall of Plac Solidarności: a panel with the image of Lech Wałęsa next to a hole into which tourists can stick their face to have their picture taken together with that icon of modern Polish history.
The square and its monuments used to be a key visitor attraction in itself for many years, and to a degree it still is, but these days it is dwarfed by the gigantic European Solidarity Centre. But it is still worth exploring the square in its own right too.
Location: to the north of the historical centre of Gdańsk, about half a mile (800m) from the main train station (Gdańsk Główny), and about a mile (1.4 km) from the Old Town centre and waterfront.
Google maps locator: [54.3605,18.6492]
Access and costs: easy and free.
Details: a five-to-ten-minute walk from the station along Podwale Grodzkie and ul. Wały Piastowskie (or one tram stop), and about half an hour on foot from Gdańsk's city centre and waterfront, at the end of ul. Łagiewniki. Access to the site is free at all times.
Time required: Having a look around hardly takes half an hour. But add on time for getting there, and for visiting the various other sights here.
Combinations with other dark destinations: For most people, the main reason for coming to this square is to cross it to get to the massive European Solidarity Centre, which is just beyond the historical No. 2 Gate. The smaller exhibition inside the old Sala BHP is also worth a look, and a walk around the old shipyards, now open to the public, is also recommended.
For more see under Gdańsk in general.
Combinations with non-dark destinations: see Gdańsk.