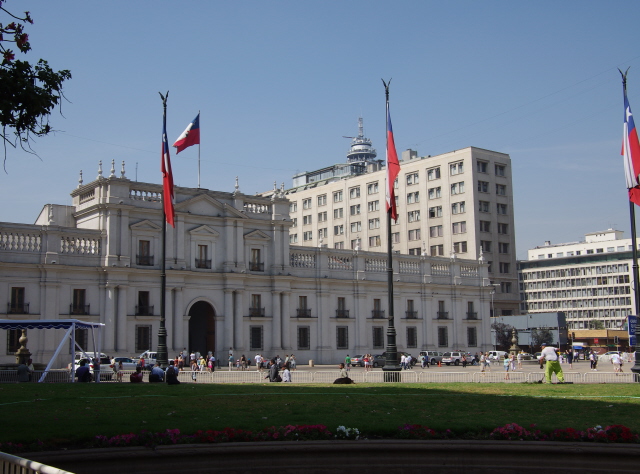 The capital city of Chile, and as such also the centre of power during the military dictatorship era of Augusto Pinochet. Today, there are several significant sites connected to that era for the dark tourist to explore.

What there is to see: All of the sites given separate entries here are related in one way or another to the dictatorship years:
- Memorial Museum
- Villa Grimaldi – Parque por la Paz
- Londres 38
- Cementerio General

The state-of-the-art Memorial Museum is now what must rank as Santiago's No. 1 dark tourism attraction – truly impressive. The former site of the city's principal detention and torture centre under Pinochet, the infamous Villa Grimaldi, has been established for longer, since it was turned into a national memorial to the victims of the military junta and its crimes against humanity. In addition, one of the city centre clandestine detention centres, at Londres 38, has recently been converted into a memorial as well and forms a sobering counterpoint to an otherwise exceptionally pretty neighbourhood. And at the main cemetery, the unusual Cementerio General, you can visit not only Allende's tomb, but also graves of various other victims of the dictatorship.
The former presidential palace La Moneda, scene of some of the most dramatic images of the military coup in 1973 (see under Chile), is another significant stop on an Allende-Pinochet trail in the city centre. It was here that Allende breathed his last, after delivering a moving and defiant speech to his followers on the radio, while Pinochet had the palace bombed by the airforce. At the side of the palace on Morande street spot the side door, which was the entrance Allende, being a humble president, preferred over using the grand main portal – and it was also the door through which he made his last exit, when his body was carried out by the military after his death (suicide or assassination … it's still not conclusively clarified).
The palace as well as the Allende statue erected at the eastern side of the square in front of the palace's northern façade are focal points for virtually all guided tours around the city. Plaques on the pedestal quote legendary passages from Allende's final speech.
Other related spots are perhaps less obvious to general tourists – such as the former seat of the National Congress (moved to Valparaiso during the Pinochet era), or the Supreme Court round the corner, at the intersection of Bandera and Compania de Jesus. The space ion front of the portal was full of demonstrators at the time of my visit. On the square in front of La Moneda look out for the still visible bullet hole scars in the walls of the building on the north-eastern corner, at the intersection of Morande and Augustinas streets.
On Plaza de Armas, the historical heart of the city, note the statue of Cardinal Raul Silva Henriquez outside the cathedral. He was an outspoken opponent of Pinochet's and founder of human rights 'Committees' and 'Academies' that right from the start were campaigning against the junta's political repression, abductions and "disappearances". He is buried inside the cathedral.
By the way, though, don't falsely assume that all historical debate in Chile is necessarily critical of the Pinochet years. Oh no! There are still lots of people about who think it was a very good thing to "deal with the communists" the way Pinochet did. I encountered an example of this in a German restaurant (I followed a specific recommendation – normally I'd prefer other cuisines), which is full of devotional objects not just of typical Germanic sorts, Emperors, the Red Baron, et al., but also is a kind of Pinochet "shrine"!
Apparently there's now even a proper Pinochet museum, sponsored by the "Pinochet Foundation". Amongst the things on display are said to be his collection of model soldiers and the uniform he wore during the coup in 1973! … needless to say, it is a rather controversial place. And I had no chance of seeing it. They are apparently quite secretive and exclusive.
Note that what at first appears to be the counterpart Allende museum, called Museo de la Solidaridad, is rather an art gallery, with little to offer that is actually dark (or as weird as the former dictator's shrine), even if the art displayed may have certain political overtones. I gave it a miss (also due to lack of time), but if you want to check it out: it's located on Av. Republica 475, south-west of the city centre. It's open Tue - Sun, 10 a.m. to 6 p.m.; admission 1000CLP, free on Sundays.
If wandering through the Barrio Brasil to the west of the inner city centre look out for the Casona de Cienfuegos 41 (which is home to the law faculty of the Universidad Alberto Hurtado). It's facade is adorned with some fantastic gothicy gargoyles – and a skeleton Mr Death complete with an hour-glass in one bony hand. He also has a particularly sinister grin.
Not far from there also have a look at the Basilica del Salvador – a large neo-gothic brick pile that was severely damaged in recent earthquakes and now lies derelict and unused, with wooden supports to prevent it from collapsing altogether.
A place to drop in for a combination of a bit of dark tourism souvenir shopping with a drink and/or meal is The Clinic – named after and home of Chile's premier satirical magazine. In its shop I purchased an addition to my collection of dark tack: a "Pinochito" voodoo doll (the set comes complete with plenty of pins!).
All in all Santiago must be regarded as South America's premier hotspot for dark tourism, not only for the range and quality of the sites within the city itself, but also for the fact that is the jumping-off point to other great dark tourism destinations both within Chile and beyond that are practically accessible only from here.
Location: Roughly in the centre of the northern two-thirds of this long stretched-out country of Chile, over a thousand miles (1700 km) from the northern city of Arica, a whopping 1400 miles (2200 km) from Punta Arenas in the south, but only a good 100 miles (170 km) from Mendoza in neighbouring Argentina to the east.
Google maps locators:
[-33.438,-70.651] - Plaza de Armas

[-33.442,-70.654] - La Moneda
[-33.4452,-70.6628] - Casona Cienfuegos 41
[-33.4413,-70.6618] - Basilica del Salvador
Access and costs: quite easy to get to; not necessarily the cheapest of cities.
Details: all roads – and domestic flights – in Chile lead to Santiago, the undisputed travel infrastructure hub of the country. International flights to/from Arturo Merino Benitez airport (SCL) connect to numerous other hubs in the Americas, a couple to Australia/New Zealand and a few destinations in Europe too (Madrid, Frankfurt, Paris). The adjacent domestic terminal makes much of the rest of Chile regularly and conveniently accessible too.
Given the distances in this long and thin country, flying is often the only sensible option to far-away places such as Punta Arenas in the far south or Calama in the Atacama in the north (see Chuquicamata and Chacabuco). Overland transport is mostly provided by bus, typically modern comfortable coaches. The train network, on the other hand, has shrunk to a measly few lines around Santiago that are mostly worth it only for the train experience itself.
Within the city, the squeaky clean and efficient metro could put many a European or Northern American system to shame, and is both cheap and easy to use. It's useful for covering longer distances, such as to the Memorial Museum or the Cementerio General, but within the heart of the city walking is both pleasant and safe.