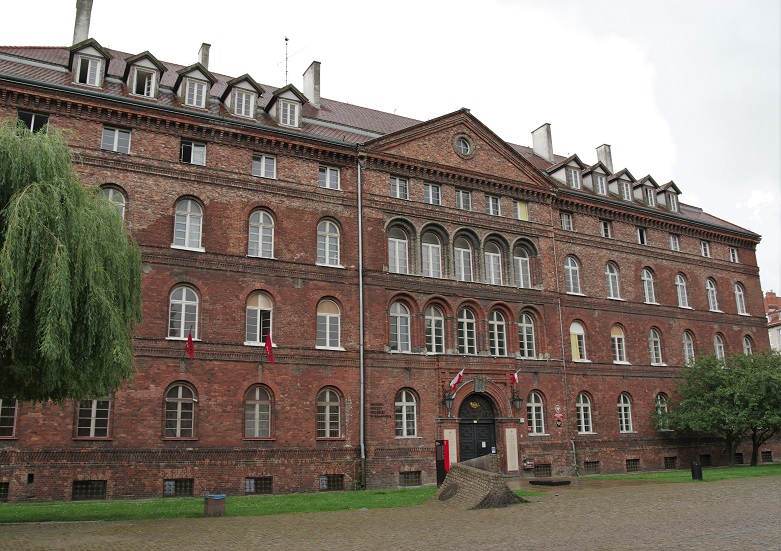 A Gdańsk site of celebrated heroism, namely on the part of the Poles who defended this post office against the German attack at the very beginning of World War II on 1 September 1939. In fact it took place parallel to the opening of the battle at Westerplatte. Though smaller in scale, the story of the defence of the Polish Post Office is similar: despite massive superiority in firepower, it took the attackers an unexpectedly long time to overcome the fierce Polish resistance.

More background info: Gdańsk, which was then known under its German name Danzig, and effectively was a German city, had the special status of a (semi-autonomous) "Free City". This meant that the Polish minority held certain privileges, including the running of this Post Office. It effectively had the status of an exterritorial part of Poland.
Especially as tensions increased between Germany and Poland in the run-up to World War II, the Post Office was supplied with its own weaponry and military personnel so as to be able to fend off an attack for ca. six hours – the time it was expected to take for help to come from the Polish Army.
As it turned out on 1 September 1939 when the attack did come, no help could be brought in, as the full-scale invasion of Poland was already under way. But the 57 defenders inside the Post Office building held out much longer than had been expected. Sources vary, but apparently the Poles defended the building for between (at least) 9 and (probably) 15 hours before finally being overcome.
The German SS forces blew up part of the outer walls and brought in flame-throwers to set the building alight. Five defenders were burned alive. Only then did the surviving Poles surrender – in fact the first two to emerge, waving white flags, were apparently shot by the Nazis. Only then were the rest allowed to surrender … war crimes really started early in this conflict!
Most of the Polish survivors of the battle were later sentenced to death and executed. Merely six of them are said to have escaped, two of whom were captured the next day. At least two managed to hide and survive the war to tell their story.
Today this episode is very much part of the 'mythology' of Polish heroism in their resistance against the Nazis right from the start. This is honoured by a monument and a small museum in the reconstructed Post Office building – which otherwise still fulfils that postal function to this day.
The episode of the attack on this post office was also famously integrated into Günter Grass' novel "The Tin Drum" ('Die Blechtrommel') and also featured fairly graphically in the film adaptation.
What there is to see: Not all that much. Outside the building stands a stainless steel monument, which is quite remarkable – some call it "outstanding" and "aesthetically pleasing", others are less praising  in their aesthetic assessment. The Rough Guide simply calls it "spiky", which it indeed is. Behind the building in a courtyard/car park there is another monument at the very wall where the defenders had to stand with their hands up after their surrender.
Inside today's (rebuilt) Post Office building is a small museum. It has two parts, the first of which is devoted to the events of 1 September 1939 and the heroic defence of the building against the German SS attackers on day one of World War II. There are a few artefacts such as guns and personal belongings of the defenders, as well as photos (which the Nazis shot during the attack) and documents – mostly in Polish, but there are some explanatory text panels in English and German too.
The rest of the museum is devoted to the history of the postal service and on display are various telecommunication machines from different eras, in particular several veteran teleprinters/telegraphs. This is obviously less likely to be of great interest to the dark tourist, but since you're likely to be watched by the museum's curator (who switches the lights on/off as required) it's only polite to honour that part of the museum with at least a brief visit too.
Location: a bit north of Gdańsk's inner Old Town, on pl. Obroncow Poczty Polskiej (or Pl. Poczty for short).
Google maps locator: [54.3552,18.6569]
Access and costs: easy to get to and inexpensive; opening times a bit unclear.
Details: Best reached on foot from the centre of Gdańsk. From Podwale Staromiejskie leading towards Targ Rybny by the waterfront, turn off north into Tartaczna – the square with the monument and the Post Office building appears on the next corner on your right.
Admission: 10 zloty (allegedly free on Tuesdays).

Opening times are a bit unclear, different sources give different times – and when I went in August 2008 on a Saturday morning for 10 a.m. I found it locked, but asked at the post office counter; the museum's curator was then alerted to the presence of potential visitors and he kindly opened the museum. There seems to be agreement that the museum should be open on a regular basis from 10 a.m. to 4 p.m. at least Wednesday to Friday, some sources say also 10.30 a.m. to 2 p.m. on weekends. (I can vouch for the fact that it is definitely closed on public holidays, even if it's on a weekday when it should be open). Mondays and Tuesdays appear to be uncertain. Some sources say 'closed', others even say it's free on Tuesdays. Allow time for coming back in case you go on one of those days and find it closed …
Time required: The museum requires about half an hour at best. Plus a few moments to view the monuments outside. If you can read Polish and/or are particularly interested in the postal history section too, then you may need a bit longer here.
Combinations with other dark destinations: in general see under Gdańsk.
One of the city’s most significant and best dark sights, the large Museum of the Second World War, is just a couple of minutes’ walk from the Post Office, to the north-east, across the canal, on the right.
Combinations with non-dark destinations: see Gdańsk.