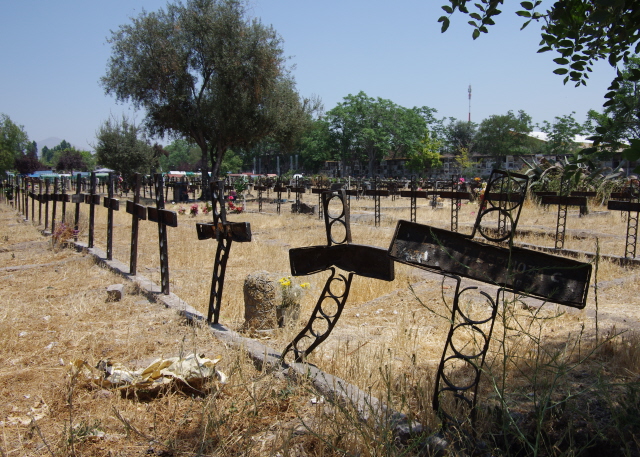 As the name 'general cemetery' implies, this is Santiago de Chile's main cemetery, a large expanse of over 200 acres to the north of the city centre. Apart from its size (and the number of dead buried here – ca. 2 million!) it is primarily of interest to dark tourists for a few individual graves, not least that of Allende and other prominent victims of the Pinochet dictatorship in Chile, but also a patch of nameless ones.

To sum up: a visit to the Cementario General should be high on the priority list of any dark tourist coming to Santiago, or any culturally/politically aware tourist, really. It's as impressive as it is moving. Compared to the other well-known South American cemetery, the much more touristy though significantly smaller Recoleta cemetery in Buenos Aires, this sprawling and contrasting counterpart in Santiago may have less of the gothic romanticism or popular culture appeal (cue: Evita Peron), but it more than compensates for this with a far more genuine emotional impact thanks to the personal stories and politics associated with the prominent dead here, as well as the tragedy of the not so prominent, or even nameless unfortunates that fell victim to Chile's darkest chapter in the 20th century.
Location: about a mile and a half (2.3 km) north of Santiago de Chile's city centre (if measured from Plaza de Armas) in the Recoleta district.
Google maps locators:
[-33.4127,-70.6445]  - main memorial
[-33.415465,-70.649621]  - Allende's tomb
[-33.40866,-70.648279]  - Patio 29
Access and costs: a bit out of the city centre, but not difficult to get to; free.
Details: Visiting this cemetery is a component of the Human Rights walking tour offered by La Bicicleta Verde – see under Santiago and this sponsored page! – which obviously has the added benefit of not only a thematic narrative by the guide but also the fact that you won't have to bother about navigating. But with the help of this chapter you could also do it independently:
You can take the metro from the city centre (e.g. from the interchange stations Santa Ana or Los Heroes), line 2 (yellow) goes to the dedicated station "Cementerios". Couldn't be easier, so far. This station is by a secondary entrance along the eastern side of the cemetery on Recoleta street, but that's not a bad starting point, as it is the closest to the main memorial to the victims of the dictatorship. The main entrance, however, is on the southern side at the northern end of La Paz street, where your tour may well end. From here you'd either need to walk back to the metro or catch a cab back to the city centre. Or walk it all – it's doable.
Opening times: daily 8:30 a.m. to 6 p.m.
Admission free.
Time required: Just ticking off the individual graves mentioned above will already take at least an hour, probably longer. Guided tours tend to last up to two hours. To have a good look around the rest of this remarkable cemetery can take much longer than that still. If wandering around cemeteries is your kind of thing, then I'd say allocate up to half a day.
Combinations with other dark destinations: in general see under Santiago de Chile – I visited the cemetery as part of the longer 'Human Rights'-themed guided tour of Santiago by La Bicicleta Verde (see this sponsored page!), which also included Londres 38 and a walk around other important spots in the city centre, e.g. to the La Moneda ex-presidential palace – where Allende died in the Pinochet coup on 11 September 1973 (i.e. where he got killed, either by his own hand or …). But of course you can do all that independently as well.
Combinations with non-dark destinations: see Santiago de Chile.