- darkometer rating:  3 (but full marks on the kitsch and weirdness scale) - 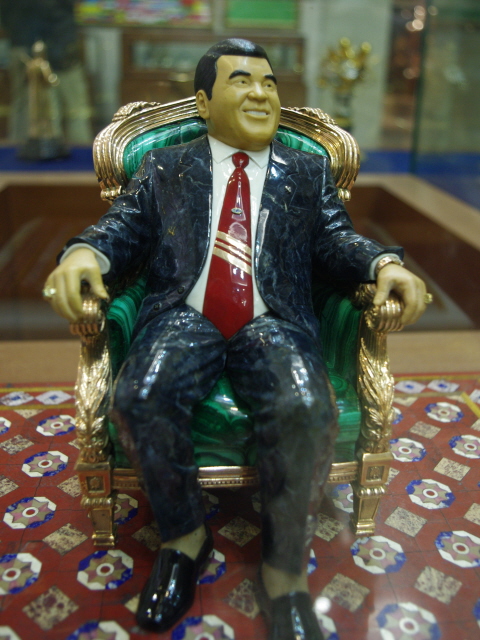 A museum whose exhibits are primarily gifts that the late Turkmenbashy received during his reign as President of Turkmenistan. It's a kitsch fest of the highest order. Totally unmissable for anyone with a taste for such weird extremes of tackiness.

What there is to see: An amassed jumble of crazy kitsch, exotic items made of gold, tapestries depicting scenes from the life of the Turkmenbashy, models of past monuments, and much more. It makes your senses reel from the word go.
Even the outside is over the top. You enter past rows of columns, bronze lions and two other buildings of a similar style, approaching the grand front facade of the museum with yet more columns and gold domes.

A marble plaque by the entrance bears words from the "sacred Ruhnama" modestly wishing the Turkmen state eternity. More accurately: it wishes for the Turkmen people and Turkmenistan to last as long as the world will last, but for the independence and impartiality of the state he tops this and actually uses the word "forever". Don't ask for logic.

Inside the museum, a huge central hall forms the centrepiece, architecturally at least – and impresses with its dimensions. It's the rooms that branch off to the sides, though, that contain all the marvels this place has to offer.

These are arranged on two floors, the ground floor and the seventh floor (yes, you read right, two floors numbered just so). All are filled with increasingly bizarre items, apparently all once gifts to the Turkmenbashy from his many friends in foreign lands. OK, some nations feature more than others, and you can detect a certain affinity with other more or less Muslim countries (there's even a gold scale model of the Grand Mosque in Mecca complete with a little Kaaba).

Horses and camels are also heavily represented, the latter also in one exhibit that really stretches the word kitsch out of all imaginable proportions.

The absolute biscuit-taker, in my view, is however a rather small item: a ca. 10 inch (25 cm) tall figurine of a seated Turkmenbashy looking rather smug and pleased with himself. In its expression it is kind-of the miniature equivalent of the grand big golden statues outside.

Modern themes and technology are represented too, e.g. there's a gold oil pump and a gold model of a MiG-29 fighter plane on a stick (looking like a billionaire's version of an Airfix model kit).
A scale model of the Arch of Neutrality (see under Ashgabat) can be found here too.

Plenty of pictures hang on the walls – including scenes from Saparmurat Niyazov's life, from childhood to Great-Turkmenbashy-hood. There's one showing him freshly orphaned amidst the rubble left by the 1948 earthquake (again see under Ashgabat), and one of him at a writing desk gazing pensively into empty space – while the background is filled with scenes from ancient Silk Route history, including Merv and a representation of a not-so-Silk-Route modern Ashgabat palace. The pencil in his hand is probably meant to suggest that this was how he penned his "holy" book of wisdom, the "Ruhnama".

The latter is also celebrated in various forms. Apart from more gold, jewels and silver pieces involving the book, there's a tapestry showing the Turkmenbashy in front of a library wall of books holding his own green book open in his hands. The message seems to be: "there's only one book you really need to open and it's green and it's written by me!"

The highlight of Ruhnama worship comes in the form of two oversized replicas of the Ruhnama vol. 1 and vol. 2 suspended in the air behind a mahogany desk. At this stage guests allegedly add their entries into a kind of golden book that is laid out on the desk. When our group visited, our English guide was asked to sit down and write a few words in the book. I imagine that sort of thing would not have happened back in the days when the Turkmenbashy was still alive. So maybe even from the point of view of the museum guides and wardens, the seriousness of the whole affair is now viewed a bit more tongue-in-cheek.

Location: right on the southern edge of Ashgabat, opposite the grand Independence Monument.
Google maps locator: [37.8768,58.3822]

Access and costs: an awkward outskirts location and not cheap, but worth it.
Details: unless you go with an organized group trip you will need transportation to get out here, to this edge of the city location. If the driver is not familiar with the museum itself, you could ask to be taken to the Independence Monument (one of the city's most prominent) and have the driver drop you off on the opposite side of the road. The drive in a flagged-down car may cost something like 10 Manat.

Admission to the museum is a steep 25 USD for a foreigner – and the photo permit they charge is excruciatingly expensive too: a whopping 100 Manat per person! When our group visited, though, they offered us the generous compromise of charging that sum just the once for the whole group so those interested in taking pictures, i.e. almost everybody, had a whip-around – this brought the price down to a pittance; and the admission price was already included in the tour package price anyway.

Time required: at least an hour. When I visited as part of an organized group tour we were given a guided tour. Many of us, however, quickly separated from the guide and scuttled around looking for photo ops to get the weirdest of the stuff covered. We would all have liked to have had more time here, but were rushed on because we had to set off for Darvaza. Under different circumstances I'm sure we would have insisted on being given more time. I'm certain we could have spent two hours here with ease.

Combinations with other dark destinations: see under Ashgabat.