Queen of the Sea train wreck 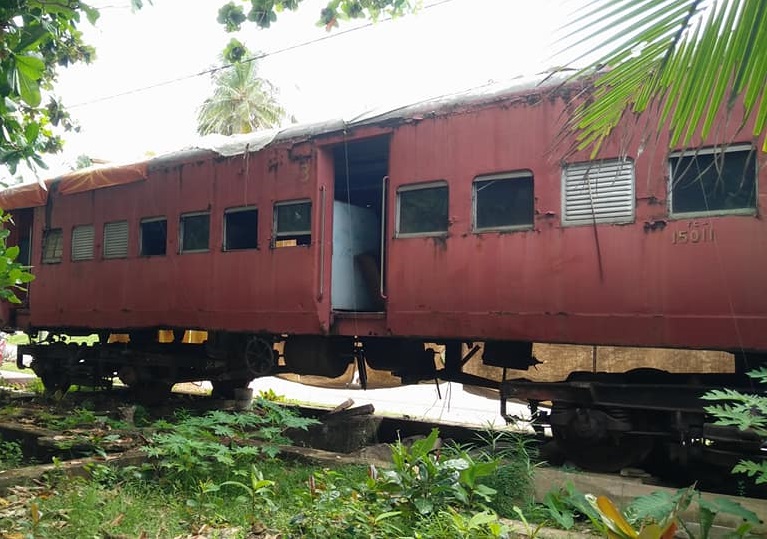 UPDATE: most of the train wreck has meanwhile been removed, now just a single carriage is still on display, at a different site serving as part of a memorial.
------------------
The tsunami of Christmas 2004 hit Sri Lanka badly, and one of the most tragic elements was the Queen of the Sea train disaster.
The Queen of the Sea is the name of a regular passenger train connection between Galle and the capital Colombo. On the morning of 26 December 2004, the train was full – indeed, as is often the case in Sri Lanka: totally overcrowded. The train was just trundling past the village of Peraliya when it was hit by the succession of waves that was the tsunami.
The first wave stopped the train as water surged around it. Passengers initially thought they'd be safe from the surging waters inside, if they climbed on top of or clambered behind the carriages – but when the second, much higher wave came the waters completely engulfed the train, swept it off the rails and smashed it into the trees and houses inland, crushing the people who had grappled for safety behind it. The carriages were completely flooded drowning everyone inside.
A compounding element of the disaster was that the train was so packed that the doors could not be opened in the ensuing panic. More waves rolled over the train – and the final death toll was in the region of 2000, making it the single worst train disaster in history.
After the slow and painful clear-up operations, a few of the wrecked carriages were first put back upright at the disaster site in Peraliya, as a kind of memorial. But it was a controversial sight – so it was later moved to Hikkaduwa Railway Station where the battered railway carriages stood on a siding parallel to the actual train line away from the platform opposite.
Normal train services meanwhile resumed on the line – and it must have been a disconcerting sight going past the wreckage on a train …
The site was sometimes shown to foreign tourists too – though it was slightly controversial. It certainly must have been a grim sight, all those dented and twisted red carriages that were the tomb of such an unbelievably large number of people …
But now most of the wreck has been removed; just a single carriage is still there, standing upright on its tracks, somewhat battered and dented.
Nearby are a couple of a small museums, or rather exhibitions of photographs of the tsunami, which allegedly are quite graphic (hence no photography is allowed inside). And a monument was erected that specifically commemorates the victimes of the Queen of the Sea.
Location: the original site is/was a good 12 miles (20 km) north-west of Galle in the south of Sri Lanka.
The single rail carriage is now found next to the Community Tsunami Museum (admission Rs 500), which is just south-east of the General Tsunami Photo Museum (free); both are right by the main Colombo-Galle road (A2), in Peraliya north of Hikkaduwa.
Google maps locator:[6.16834, 80.08829]
A good 150 yards south of the carriage/museum is a monument at a tsunami victims mass grave. Another museum of tsunami photos can be found in Galle.
The above photo and the recent (December 2019) update details are courtesy of Simon White