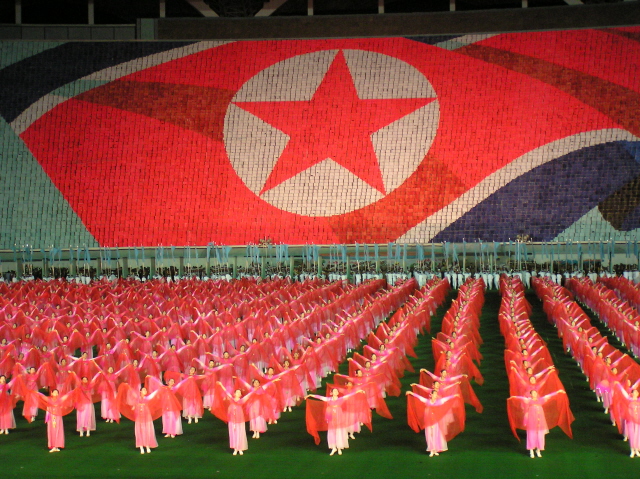 The (former) "Arirang" Mass Games (so it is generally agreed) were the single most amazing thing that North Korea had to offer, indeed the greatest show on Earth. Simple as that. It's a visual spectacle like no other, involving over 100,000 performers, gymnasts, dancers, soldiers, singers, acrobats, and 20,000 human "pixels" providing an ever-changing backdrop. The wow-factor is almost indescribable.
In 2012 it was announced that this particular show would be discontinued, but then they suddenly decided to run another season of it in 2013. We'll see what will happen in the future. But if they eventually do stop running the show as Arirang then we can expect something new to take its place, perhaps an even more exuberant show?

More background info: Meticulously choreographed mass rallies and performances have always played a part in (especially) communist countries' propaganda-cum-entertainment events, but nowhere has the art been so perfected and so blown out of any proportion than in North Korea. There are in fact several mass events of the sort in the country, but the pinnacle of it all until recently was the "Arirang" show in Pyongyang – by far the biggest and most carefully choreographed such show. The name is derived from a folk song, a national all-time favourite, which naturally features in the show.

The Arirang Mass Games had been running more or less unchanged for many years – nominally to celebrate some special anniversary or otherwise important date for the country (when I was there in 2005 it was the 60th anniversary of the end of Japanese colonial rule – at the end of WWII). But over the last few years they had become a yearly institution – apparently there's no shortage of special anniversaries to justify the show. Usually the shows ran from August and into September or even October. In fact, many organized tours to North Korea have been built around an Arirang show as the highlight of the entire itinerary. And arguably it always was – even though from a dark tourism perspective proper, there were only a few truly gloomy elements in the show – depictions of war, especially. Otherwise it's just the enormity and over-the-top weirdness of it all that made it.

This indescribable extravaganza, it was announced in 2012, will not be around much longer, apparently they even wanted it discontinued after that year's season, but then it was suddenly extended for another season in 2013. It seems that it was felt the show needed an update, after the death of Kim Jong Il. The old Arirang show only had references to the eternal Great Leader (his daddy dictator predecessor Kim Il Sung). Maybe a new choreography will include glorification of the deceased Dear Leader too? We will have to wait and see. It is unlikely, though, that the Arirang show will simply disappear without some sort of follow-up.

When I was on a group tour of the DPRK in 2005 we were in for a very special treat indeed: Kim Jong Il was there too! We half suspected that something special would happen that night. Contrary to earlier indications, we were suddenly told that no bags or cameras would be allowed in the stadium – to the great disappointment of many – and that we'd need to dress up smartly with shirt and tie and all, and that we'd have to show our passports at the security checks. Indeed the security at the stadium was the tightest ever. Then, shortly after we had all taken our seats, all 150,000 spectators in the stadium suddenly rose and a roaring cheer set in.

All eyes were on the dignitaries' balcony, and indeed, among a string of mostly green-clad Army generals: there he was, the man himself, the "Dear Leader" Kim Jong Il. This was his first public appearance in over two years and we were there to witness it! Incredible. The atmosphere made the hairs on the back of my neck stand up. The cheering went on for several minutes. There was no more than some listless waving at the crowd from the Dear Leader, then he sat down in the centre, flanked by what must have been foreign guests at this state occasion, and everybody else took their seats again and the show kicked off. The end of the show was followed by an even eerier experience. While the gymnasts on the pitch kept jumping up and down, the 150,000-strong North Korean spectator crowd rose again and as the "General"/"Dear Leader" did so too a chant of "Kim Jong Il … Kim Jong Il …Kim Jong Il …" resounded around us. It was deafening. At one point the Dear Leader even looked straight up at our section of the stadium. It made the blood in my veins freeze. The whole scene was probably the most chilling thing I've ever experienced.

The venue alone is a record breaker: Pyongyang's May Day Stadium is the largest in the world, seating 150,000!

And the show itself was more jaw-droppingly spellbinding than words can describe. But I'll try to give a superficial impression:

It started with the warm-up of the 20,000 students who, on the opposite side of the stands, form a wall that served as a kind of "video wall" – in fact the largest animated picture in the world – when the students hold up books with square cards in different colours that form the live "pixels" of huge images. They got their greatest round of applause when at one point they formed the image of the "Great Leader" Kim Il Sung. These human pixels provide an integral backdrop to the main action taking place on the pitch.

Down there some 100,000 performers created sweeping scenes involving a human DPRK flag, a symbolic reunification of the Korean peninsula, as well as all manner of gymnastics and acrobatics. The precision of the choreography was awesome. There's also a military element – e.g. when the whole pitch filled with soldiers engaging in a kind of martial arts mass performance. There's lots of heroic music and singing too, including the title song "Arirang" in a particularly screechy, kitschy version.

What it was all supposed to mean often remained obscure to the outsider, esp. if you don't know any Korean, but it didn't matter so much, and some bits were clear enough from the images … the struggle for victory in the Korean War, the building of a collective society, industrial development, agricultural achievements and, of course, the painful issue of a divided country – it got particularly sentimental at that point. In between there's also lots of pure fun and spectacle for its own sake.

Whether 2013 will indeed have been the last season that the Arirang show was run, as was officially announced, will have to be seen. And we can only speculate what may come to replace it. It's unthinkable that there won't be anything at all. Hopefully, it will even get bigger and weirder still. I'll try to find out and keep you posted. Watch this space.

Access and costs: in general see North Korea – tickets for the Mass Games have to be purchased separately when in Pyongyang (i.e. you can't pre-book or chose a particular day). Your guides will organize the tickets for you. When I went to see the Arirang show it was not cheap, the prices in 2005 ranged from 80 EUR to 300 EUR (for VIP seats). "2nd class" tickets are probably the best compromise and cost 100 EUR. But given that what you get for this is utterly unique in the world, you can't really complain about the price.

Time required: The Arirang show itself lasted 90 minutes, beginning at 7 p.m. – but getting to the stadium and (especially!) back, adds on significant extra time. You'll be carted to the stadium by bus, separately from the North Korean crowds, but after the show it can get a bit chaotic if the stadium is full and all 150,000 spectators try to squeeze out of the stadium's exits simultaneously. It was certainly full when I saw the Mass Games in 2005, and it took the bunch of travellers I was with an hour or two to regroup before we could be driven back to our hotel.