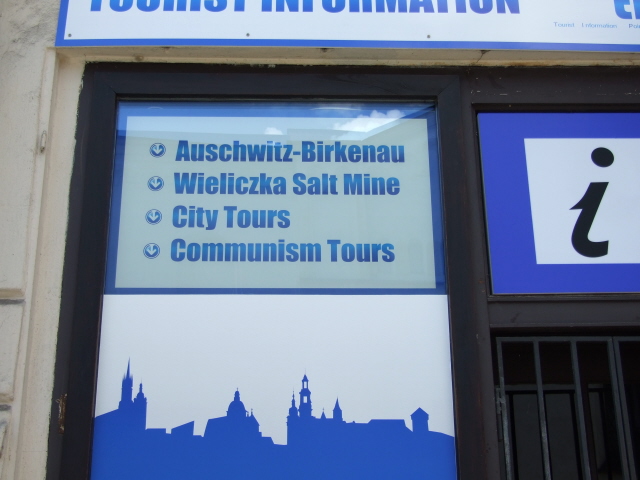 The main city of southern Poland – and a place with a particularly rich history. For the dark tourist, it's especially important as the usual base for day trips to Auschwitz, the world's No. 1 Holocaust tourism site. But Krakow itself has a lot to offer in the dark department too, ranging from a (former) Jewish quarter/ghetto to traces of the city's role during the communist era and its downfall.

More background info: Krakow is sometimes referred to as Poland's secret capital, i.e. after Warsaw, the current actual capital city. But in fact Krakow used to be the real capital for a significant part of its chequered history. From a dark tourism point of view it is mainly through its role in recent history, esp. during the Nazi occupation and the Holocaust, that makes it of special interest. But it also had its role to play during the communist era and especially in the overthrow of communism.
After decades of neglect, today the city's done up and is again an incredibly pretty place. As such it has become quite a tourist magnet too ... helped by cheap flights and good rail connections. But do not let this gloss over the dark history too much:
Krakow's Jewish ghetto was second only to Warsaw's in tragedy. It was set up by the Nazis south of the river (and the original Jewish quarter) in March 1941. It was 'liquidated' in March 1943, i.e. the remaining inhabitants were either killed on the spot or deported. Virtually the entire Jewish community of Krakow had thus been murdered in the Holocaust by the end of 1943, mostly in the Nazi extermination camps such as Auschwitz. Traces of Krakow's Jewish life, however, as well as of the ghetto can still be seen today, as touristic interest in this part of its history is fairly well catered for.
A particular boost for this came from Steven Spielberg's early 1990s production "Schindler's List", which was set and partly filmed in Krakow, and whose immense international success generated a lot of interest in the topic also from a tourist perspective. For many years there were specific "Schindler Tours" on offer in Krakow, but I couldn't find out whether these still run (I suppose not).
Another, and in some ways even more genuine input from the world of cinema came from Polish film director Roman Polanski, through his 2002 film "The Pianist". Polanski had in fact survived the Krakow ghetto himself as a young boy (unlike his mother who was gassed at Auschwitz). About eight years after "Schindler's List" Polanski in my view surpassed Spielberg's take on the Holocaust with his own film by miles. Like "Schindler's List", it also retells a true story. It is often much more drastically realistic. However, "The Pianist" is actually set in the Warsaw ghetto. Polanski left a more concretely visible mark on Krakow itself through a special monument that he part financed. This is to be found on Bohaterow Getta square.
Unlike Warsaw, Krakow escaped being almost completely levelled in World War II, partly thanks to the fact that the Nazis chose Krakow as their administrative centre for their 'general government' of the area. As a result Krakow has a lot more authentic sites to offer today, dark or otherwise.
Krakow also played a role when Poland started the beginning of the end for communism in the Eastern Bloc, which subsequently led to the end of the Cold War. This initially took the form of strikes and the formation of the trade union movement Solidarnosc, and Krakow's huge steelworks in Nowa Huta became the second most important hotspot for these acts of resistance and the general push for change (only surpassed by the shipyards of Gdansk, where it all started).

The most important element of Krakow's significance in dark tourism, however, is the city's relative proximity to Auschwitz – and tours to that sinister place form a major mainstay of the offers of the local tourist industry.
What there is to see: The old Jewish quarter of Kazimierz, just south of the centre and old town of Krakow, is fantastically intact and still boasts several synagogues, buildings adorned with Stars of David, a fairly large Jewish cemetery and today a range of Jewish cafés and restaurants again too. This complex can rival Prague's Jewish quarter!
Of particular interest to the dark tourist in Kazimierz should be the Museum Galicja at No. 18 ul. Dajwor, which chronicles the history – and destruction – of Krakow's ghetto and the extermination of its Jewish population in the Holocaust. There's a particularly well-stocked bookshop adjoining the museum proper, and regular exhibitions are being held in parts of the building too. When I was there in spring 2008, for instance, there was a particularly poignant photo exhibition of former Jewish sites in eastern Poland (the Galicja area), including ruined synagogues and such like, plus images of the sites of the former concentration camps and death camps as they look today.
Across the river, south of Kazimierz, is the district of Podgorze, which is where the ghetto set up by the Nazis was located. Of the ghetto only a small stretch of outer (restored) ghetto wall remains, along ul. Lwowska. There are a couple of plaques on this wall and frequently you'll find wreaths and candles set down by it.
On the square pl. Bohaterow Getta, from where scores of Jews were deported to the death camps, a memorial consisting of rows of steel chairs is a most striking feature today. This is to symbolize the furniture the Nazis threw onto the streets when they evicted Jews from their homes. This and the museum in the old pharmacy building Apteka Pod Orlem on one corner of the square was part financed by film director Roman Polanski, who himself managed to escape from the Krakow ghetto as a young boy and thus survived.
During the ghetto years the Apteka Pod Orlem was the point through which information about the outside world was filtered into the ghetto. Today the building houses a small ghetto museum. Unfortunately it was closed at the time of my visit so I can't say anything about its contents.