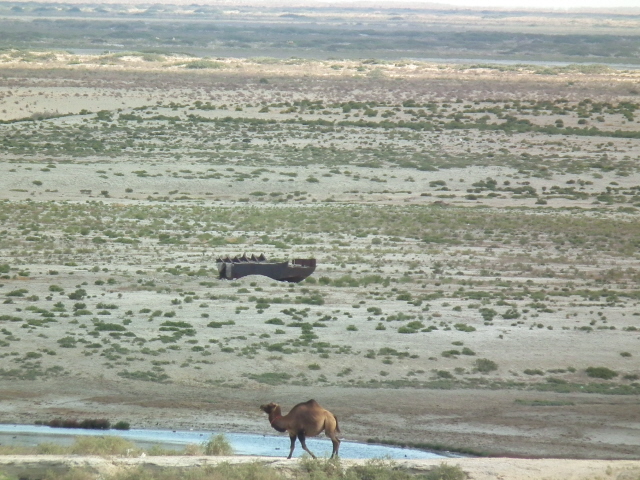 Rather: the area that once was the Aral Sea, the fourth largest lake on earth. From the 1960s onwards, the then Soviet Union diverted the two main rivers that were feeding the lake in order to implement massive irrigation projects, in particular to grow cotton (a very thirsty plant!). While this brought shorter-term prosperity, the longer-term effects were devastating. The lake shrunk. And with it the salinity of its waters went up, killing the fish in the lake and hence the fishing industry of towns like Aralsk.

After the collapse of the USSR, the desiccation of the lake even accelerated, as even more water from the two (formerly) big rivers which used to feed the lake, the Amu Darya and Syr Darya, was diverted for irrigation purposes (mainly for the cotton plantations – in particular in Uzbekistan but also in Turkmenistan).

Now there's less than 10% of the former area of the Aral Sea left, split into separate bodies of water. Where there was once water rich in fish, extends a new desert, the "Aralkum".

Of the two parts that the lake had split into, the larger southern Aral is probably irretrievably lost. Only a thin crescent-shaped body of shallow water remains on the western edge – but since it is cut off from the main rivers, it is doomed also to disappear altogether over the coming years. In the north, on the other hand, things are looking up a bit. Since the construction of a dam between the northern and southern parts, water levels in the north have been rising again (see under Aralsk), but it's still a far cry from the olden golden days of thriving fisheries …

The former shores and the desert ex-seabed are now littered with rusting hulks of boats left, quite literally, high and dry (well, more dry than high). That's the iconic image that characterizes the place today ... although more and more are being cut up for scrap – so those images may one day also be a thing of the past.

And it's not just that the shrinking of the lake deprived the local people of their livelihoods, along with it came additional health problems: through the salt and toxic dust (from chemical pollution) being blown about from the desert polluting the area around it.

The scariest part of this environmental disaster, however, has to be Vozrozhdeniya Island, where the Soviet Union used to conduct biological weapons testing. As a result of the falling water levels and subsequently receding shoreline, the once isolated island joined the mainland and became a peninsula – now it's in the middle of south Aral Sea's desert with no water anywhere in sight.

The area of the (former) Aral Sea is shared by two post-Soviet countries, Kazakhstan in the north and Uzbekistan in the south. Tours to the (former) lake, including the "cemeteries" of rusting fishing boats, feature on the fringe of both countries' tourism industries. But it's either just a glimpse of the Aral Sea as part of a larger package or, if more time is allocated to the lake (and the desert that has largely replaced it), then it is more an adventurous expedition than creature-comfort travel. So this constitutes rather extreme tourism in more than one sense …

When going to the Kazakh part of the Aral Sea, the principal base for travellers will be the former harbour city of Aralsk. From there excursions can be made that include viewing rusting "ship cemeteries" as well as seeing the remaining and revived body of water of the North Aral Sea. Overall, this is the easier approach to organize.

Visits to the Uzbek part of the ex-Aral Sea typically go via the near-ghost town of Muynak, now totally deprived of its former shoreline of the lake, which even ten years ago had receded to over 60 miles (100 km) from the town, with its fishing fleet rusting away on dry land – seeing this is a "dark" experience in itself … but there is no chance of seeing any trace of the Aral Sea's waters here, as the South Aral Sea is now virtually gone … and that is most likely gone for good!